What's the Scoop? Give Me the Dirt!

It seems that our life each May is getting a bit redundant. Last year our May consisted of - rushing to plant the garden - heading home to Wisconsin for the birth of a new grandbaby  - returning south about a month later to see how the garden had fared in our absence. This May we have again rushed to plant the garden, are now back home in Wisconsin for the birth of another grandbaby and then will be returning in a month or so to see how the garden has survived. We have a had a new grandbaby each year for the past four years, I am hoping my garden will be as fruitful!

Actually, I should say gardens, as we now have three garden areas. The east garden is the original raised garden area along the road in front of the house where the previous owners had planted flower bulbs. Last year I spent days digging up flower bulbs that had multiplied over the years. This garden was not very successful last year as the dirt that was used to build it was very rocky and mainly clay. This year, I left the asparagus and rhubarb in place that I had planted there, but the only other item I planted in that dirt were Jerusalem artichokes. These root vegetables, which  are also known as sunchokes, are supposed to grow almost anywhere and are perennials (like the asparagus and strawberries in that same bed). They are used like potatoes. According to my garden spreadsheet, I planted the Jerusalem artichokes on March 23rd and when we left the property on May 10th, there were already 2 feet high. They look like sunflowers as they grow and the edible tubers have a knobby appearance similar to ginger.

I also placed some tires in this bed to use as containers. We were told that before we purchased this property, the bank that had foreclosed on it had hired a service to clean up the house and grounds. This clean-up included removing 79 tires from the yard and woods around the house.

When I told Alan I now wanted to move some tires back onto the property for gardening, he was not enthusiastic. But, when I promised to paint them to look less tire-y he agreed that I could use them. I even found someone on Craig's List giving away dozens of tires that had already been modified for gardening - they had removed one side of the tires.  So, off we went to collect a couple dozen tires and several cans of spray paint. Four of my colorful tires are now in the east garden and are being used for Long Island Cheese Pumpkins.

Next came the south garden. I had started this area, next to the house, as a container garden last year and have expanded it this year. We placed feedlot panels around the garden area to keep out deer and then added more containers. This garden now has lots of large flower pots for tomatoes, as well as more colorful tires and some kiddie wading pools I got on clearance last fall and am using as raised beds. As soon as it was done I transplanted my tomato plants and peas from their starter pots into their containers.

The next morning, when I checked my little plants, I discovered something had climbed through the feedlot panels and dug up several of each of vegetables I had planted. Whatever critter it was, it had not eaten the plants, so I was able to rescue most of them and replant them.

Time to start googling... Alan found a product we could sprinkle around the perimeter of the garden (not near the actual plants) that was supposed to repell all sorts of animals. The label indicated this included raccoons, opossums and armadillos which were all high on our list of suspects. This product had mixed reviews on its effectiveness, so we were a bit dubious, but it was worth a try. The next morning I rushed out to inspect the gardens and everything was untouched. No critters have crossed the barriers in over a week, so hopefully we have found a solution to our nocturnal invaders.

The majority of our efforts have gone into creating a brand new garden to the north of the house that is now our largest garden area. We were able to purchase some very nice, inexpensive, collapsible raised beds that can also be stacked to make deeper beds. We chose the location for the new garden because it is flat and is the only area that is able to get sun most of the day.

The first step was to lay down landscaping fabric. Next, we placed the raised beds and then it was time to bring in the dirt. We found a business that sold mulch and top soil by the skid-loader scoop full, four scoops fills the bed of our large dually pick-up truck. We discovered this place also sold what they called 'raised bed mix' which is equal parts of top soil, sand, mushroom compost and fine pine mulch. This combination produces a loose soil with good water retention.

Our first truck load filled all my new containers and four of our double stacked raised beds. A truck load of dirt does not go as far as you would think! FYI - it takes 75 shovel fulls to adequately fill a double high raised bed. They could use some more dirt in them, but that will be added this fall or next spring.

We knew we would need another two loads at least to complete all the beds, but with time running short, we were leaving in 4 days, we opted for one more truck load for now and then will fill the rest of the beds later in the year. So over two days, we had shoveled two truck loads of dirt into 5 gallon buckets, carried them to the beds and dumped, talk about sore muscles - especially since we have not been carrying firewood into the house for a month or so. Oh, and by the way, it was 90 degrees the week we were creating the north garden.

I actually had several reasons for waiting until just a few days before we left to bring in the dirt and plant the garden. Here's the countdown of the top three reasons:
3. I did not want to plant anything too early, to avoid any produce being ready to harvest while we were gone.
2. There was a big rainstorm predicted for Thursday night, so if we finished filling the beds with dirt before then, they would get thoroughly soaked and I could plant all my seedlings on Friday (plans were to drive home on Sunday).
1. Procrastination

So we finished off the dirt Thursday morning, completed the cattle penning around the new garden and waited for the rain. We did get our rain, so early Friday morning I started carrying all of my bedding plants to the north garden to be transplanted. It worked out that we had been able to fill just enough beds to accommodate all my waiting plants.

The final step was to add the various supports and trellises for the climbing plants and then a prayer that everything will survive during our hiatus. Actually, since I have a black thumb and can't even keep cactus alive, it is probably a good thing I am not around as all of our plants take root.

Oh yeah, I had mentioned my gardening spreadsheet, we live on the Geeks' Quad, would you expect anything less? When I began planting my seeds indoors I set up the spreadsheet to track:
1.) how they should be planted,
2.) when, where and how they would be planted outdoors and
3.) what the results are for each variety.
I will use these records to make changes next year to hopefully improve upon our results. Here is a list of the columns on my spreadsheet: SEED TYPE, DAYS TO GERMINATE, GERMINATION RATE, DAYS TO MATURATION, INSIDE PLANTING DATE, OUTSIDE PLANTING/TRANSPLANT DATE, LOCATION, DEPTH, SPACING, SUPPORT TYPE and YIELD. There is probably one more column I should add: DATE ALAN EATS THIS as he claims to be chlorophyll intolerant and thus does not eat vegetables....  yet.

Here are four photos of the North Garden: 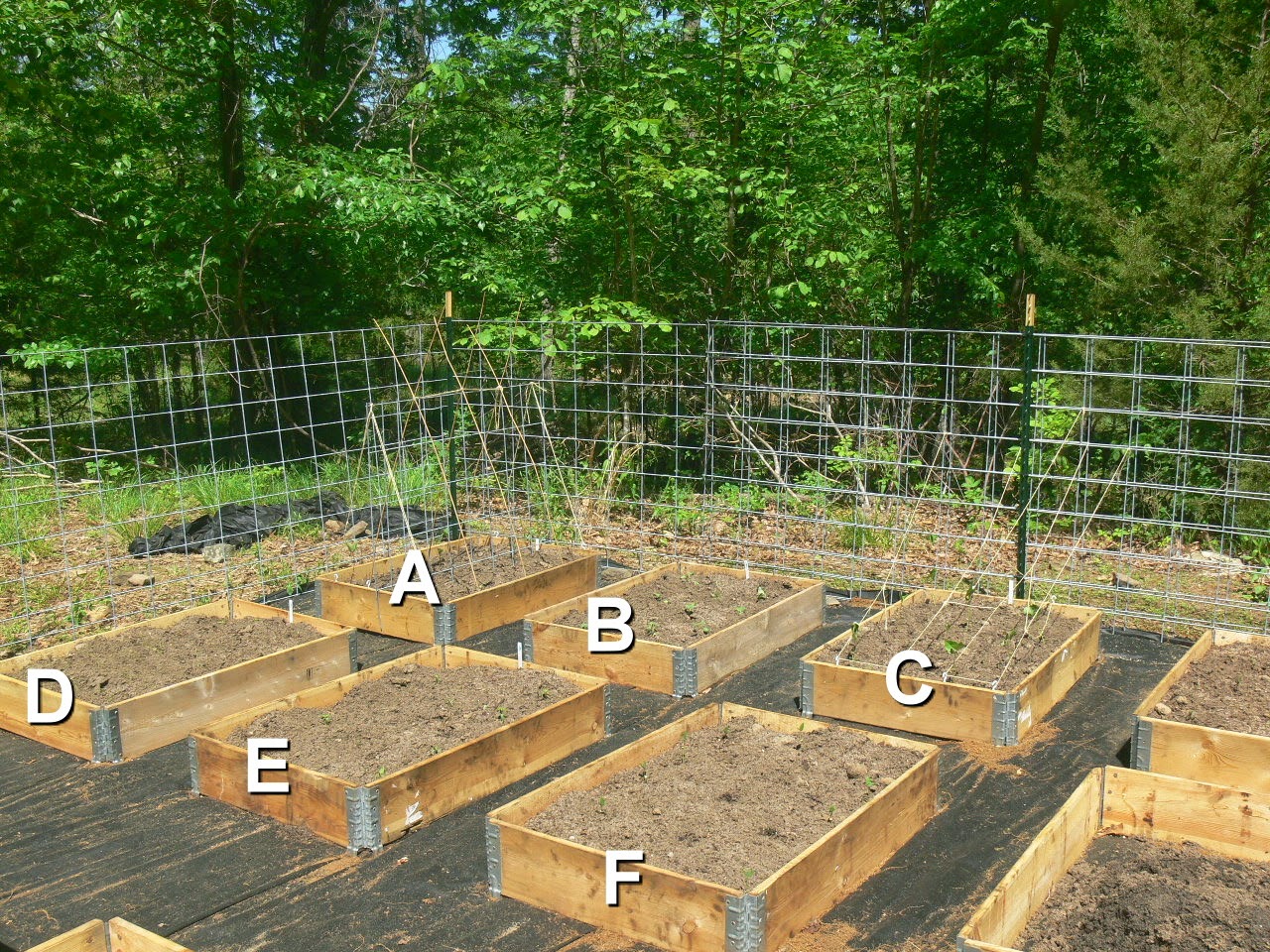 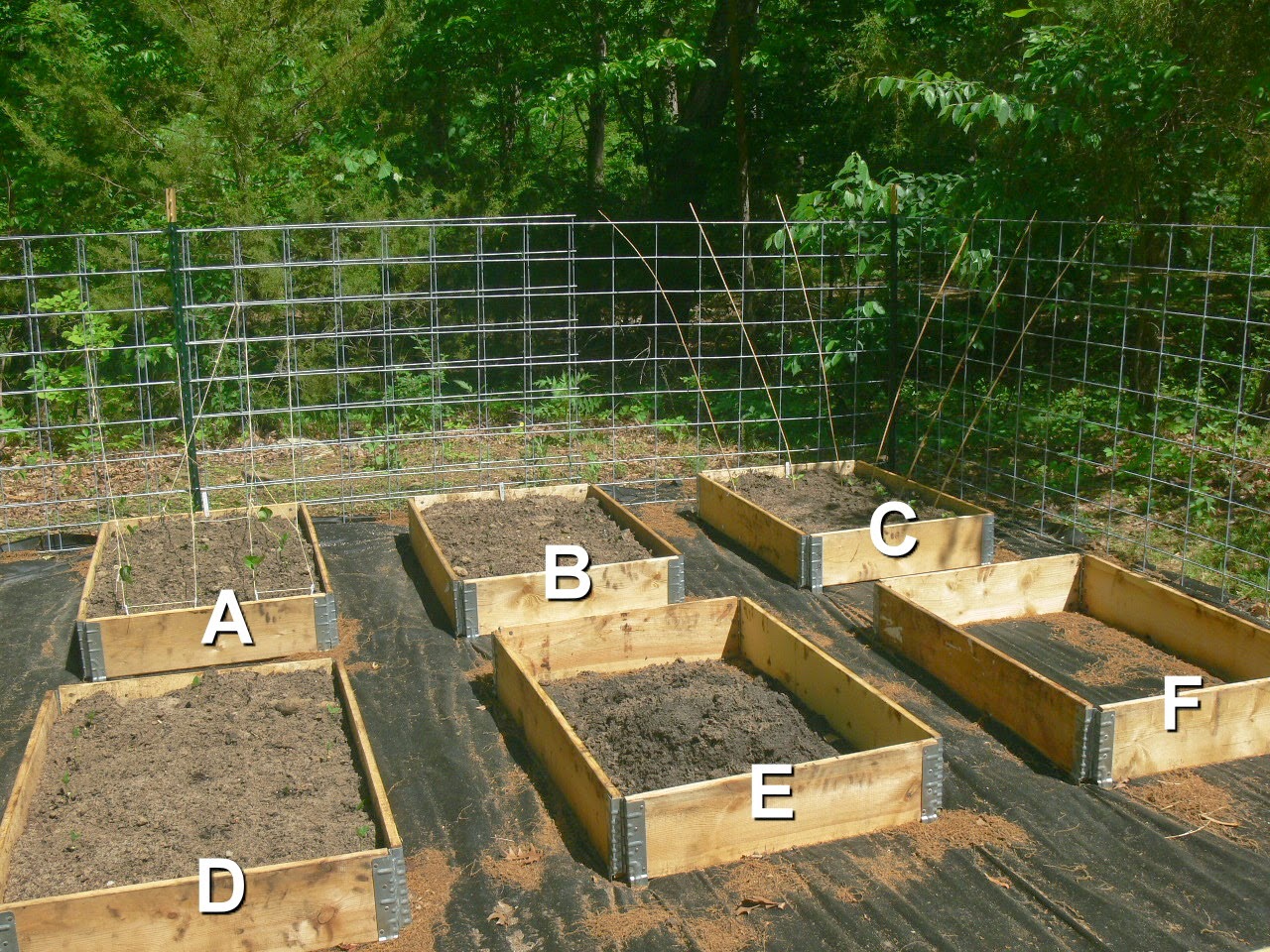 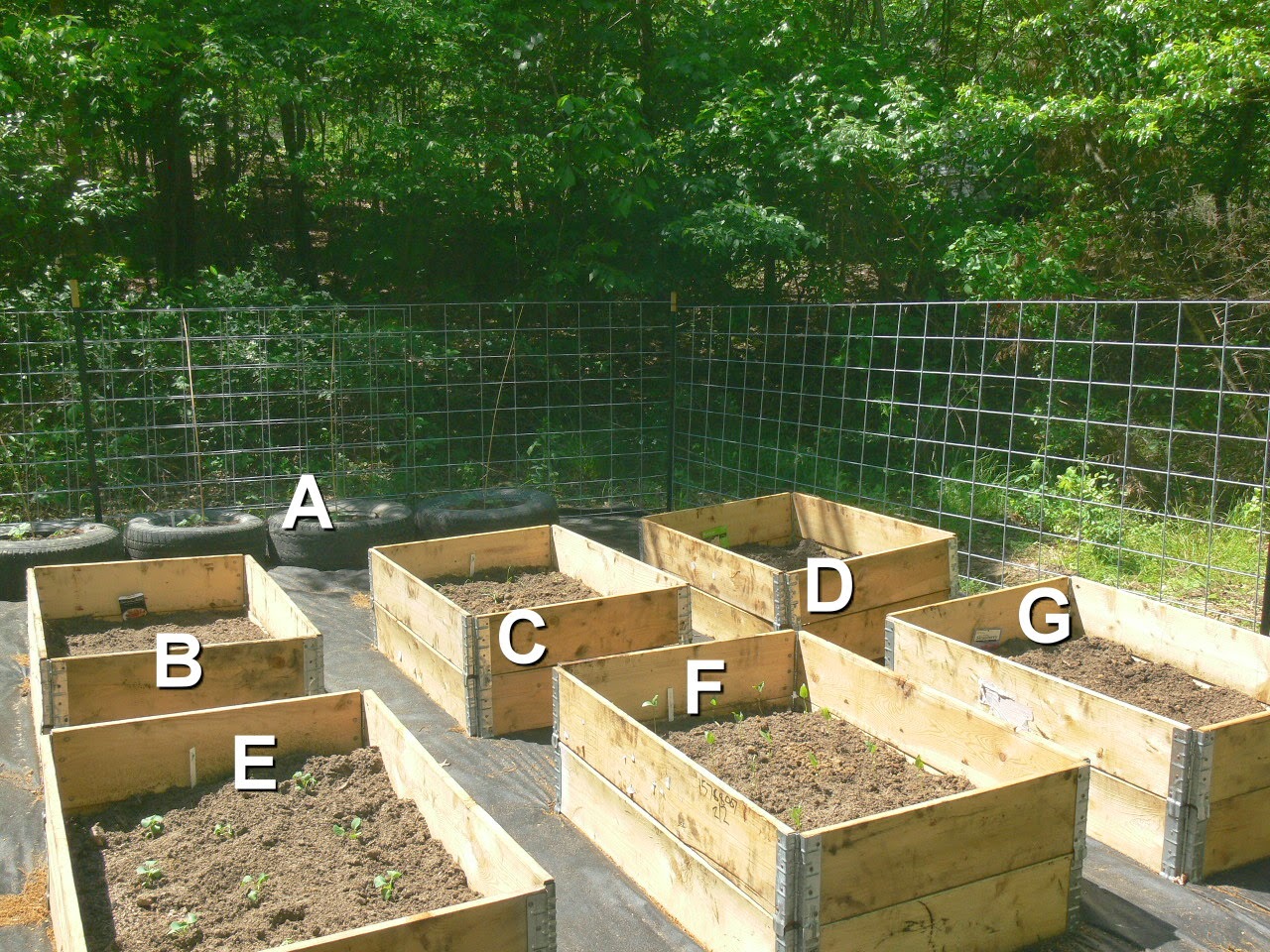 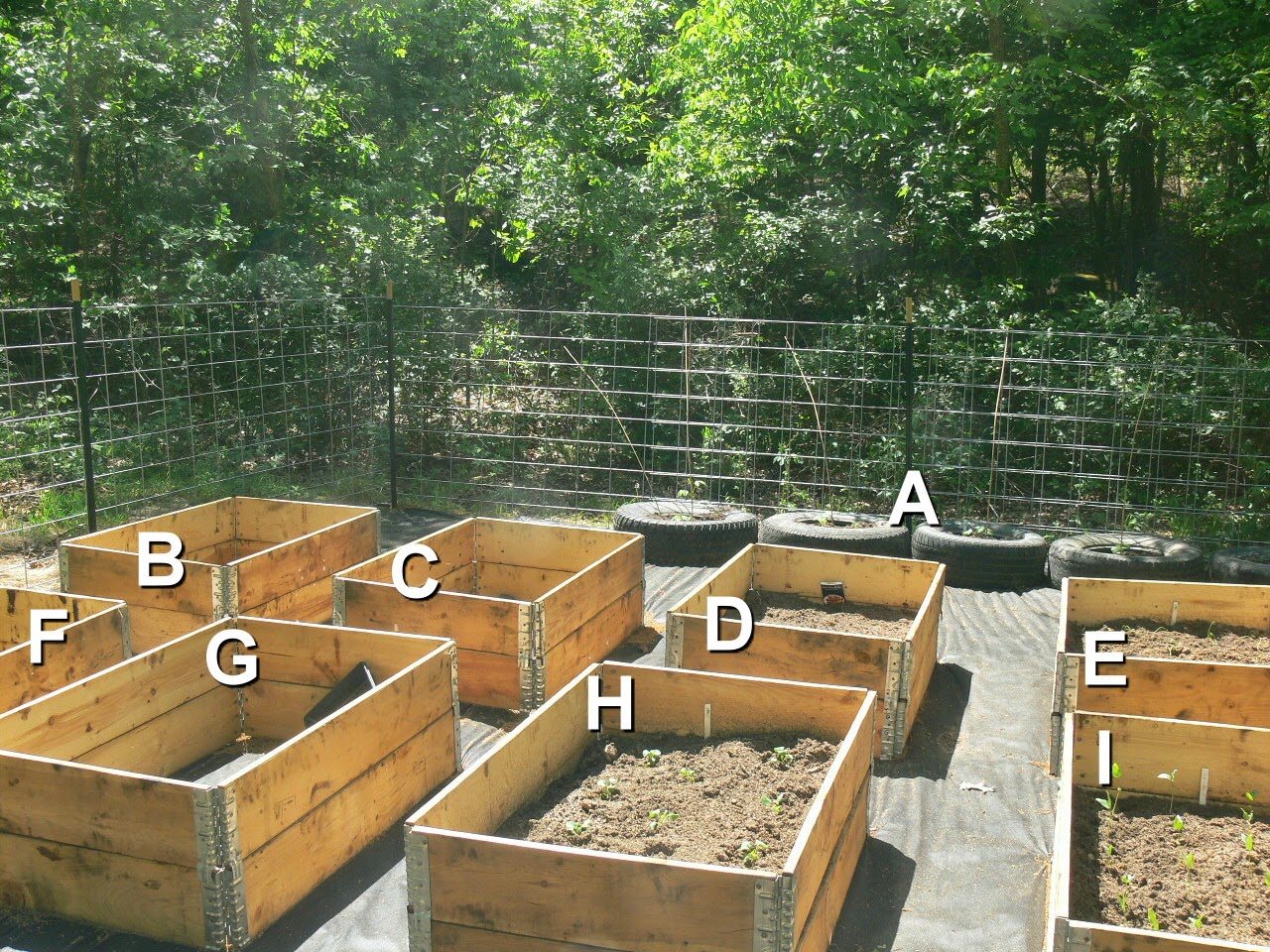