The Haves and the Have Nots

As we were returning from our trip up North I had a lot of questions, and a few anxieties, running through my mind about how the property had fared while we were gone. We have now been back just a bit over a week and I have put together a list of how things stand since my last post. 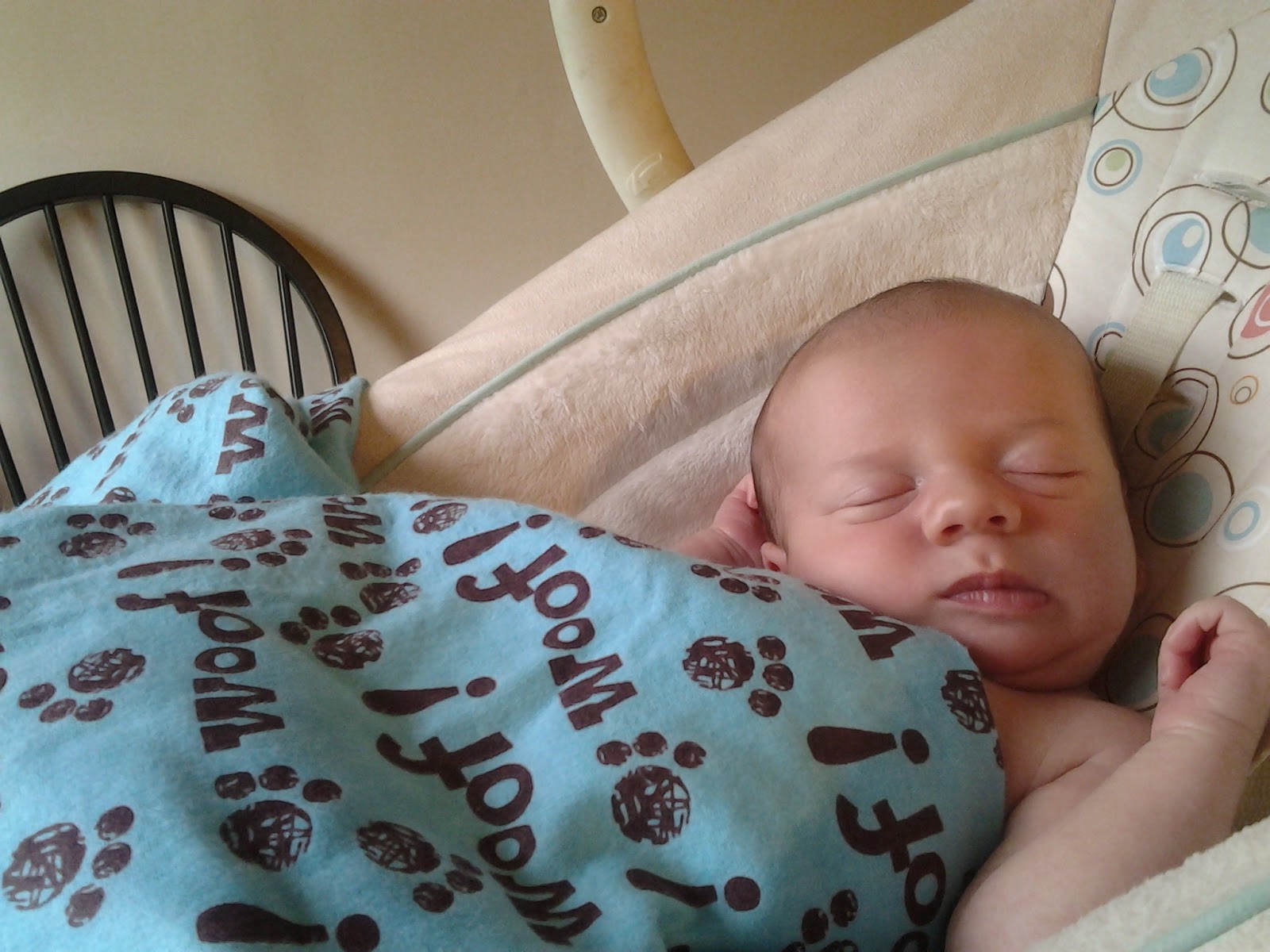 1. We have a new grandson.
We traveled to Wisconsin for the birth of our grandson, Connor. I have had the immense honor of being able to witness the birth of all four of our grandchildren. As Connor, like his sister, decided he was way to comfortable and did not want to go through the birth process, he was a born a week past his due date. This gave us about 10 days up North to visit with friends and family before we got to meet him. We then stayed another couple weeks after his birth before making the long trip back to the Ozarks. While I loved all that time playing with grandbabies and being able to visit with friends and family, there are always little niggling thoughts about things going on back at the property - bad weather, deer ravaging the garden, raccoons taking over the house....

2. Raccoons have not taken over the house.
Yes, my war with raccoons continues. We do not put out suets or bird feeders in the summer, but we did need to move the hummingbird feeders out of the trees and up onto the hooks we placed under the eaves this winter. The raccoons were imbibing on nectar each night, maybe we should have added some alcohol to see if they would get tipsy and fall out of the trees.

3. We have had a lot of rain.
Right before heading North, I placed the items in my container garden into kiddie pools in hopes that any rains that came while we were gone would not only water the plants but also partially fill the pools so that the plants would also have water during dry spells. I avidly checked the weather conditions while away and was pleased how many times rain storms were forecast to pass over the Geeks' Quad during our hiatus. When we returned everything was well watered and had grown quite well in our absence. Unfortunately, since our return we have continued to get rain daily. This tilts our balance of sun to generate solar power and rain to replenish water supplies off kilter. Our water storage tanks are now full and we are 'throwing away' water with each new rain, while our battery banks are not getting completely recharged each day as they do in sunny weather. We did go three days in a row with totally overcast skies and our batteries were still not depleted to the point of having the charge controller shut down our power to protect the batteries from over-discharging, so it has been a good test.

4. We have a lot of ticks.
With all the wet weather we had this spring, we did not get to treat the property around the house with tick repellent before we left. As soon as we returned I made a quick trip around each of the three gardens to see how everything had survived (or if it survived) and just while walking through the 'yard' to the north garden I brushed two ticks off my arms. Ticks like to lay in way on weeds and trees and then drop onto you as you walk by. The two main gardens, North and South, have landscaping fabric completely covering the ground, so once inside the fences I am fairly safe against tick attacks, it is just the trips made to get to the gardens that are rampant with ambushing ticks.

5. We have a lot of plants growing in the gardens.
Yes, our gardens have done quite well while we were away. There were very few plants that appeared to be dug up and/or missing, so something must have crossed the barrier of putridness we had sprinkled around the garden fences, but it seemed to work well over-all. There were also very few weeds and they were easy to pull, that is one advantage to planting in raised beds. A few of the  vegetables are not as hardy or as plentiful as I had hoped. In particular, my pole beans are a bit sparse. I had started these indoors along with my tomatoes, cabbages, peppers and what-not, even though beans do not tend to transplant well and should be direct planted into the garden. However, with the time it was taking me to construct the North garden, I made the decision to try starting them inside and transplanting. While the beans that sprouted did seem to handle the transplant process, there was a very low rate of germination of the seeds compared to the other vegetables I started indoors. As I was planting the garden (transplanting everything) the day before we left, I decided to plant the little seed starter pots even if the beans had not sprouted yet. By the look of my bean beds, none of these late bloomers ever really bloomed, or sprouted for that matter.

6. We have not had much produce from the gardens...yet.
I have been able to pick a few handfuls of English garden peas. I was trying to time their maturation so that they would be ready to pick when we returned. The only problem is that this meant I planted them about a month later then is recommended for this area. They do not grow well in hot weather, so it is best to plant them in either early spring or late summer for best results.

7. We have a ceiling fan.
With the entire house being wired with a 12 volt system, it is on rare occasions a challenge to find electronics that are compatible. In most cases, as long as the appliance has a 'wall wart' - that little box at the end of the cord that has the electric plug built into it - it is a very easy conversion. The purpose of the wall wart is to step down the voltage in your typical home (120v) to the voltage the appliance actually uses, which in most cases is 12 volts. For example, we bought our television at Best Buy, it is meant to be plugged into a 120v wall socket. It had a wall wart at the plug end which then sent 12 volts to the television. We simply cut off the wall wart from the end of the cord and attached a typical two pronged electrical plug so that our 12 volt house system feeds directly into the television.

The majority of people who set up solar power systems actually use an inverter to boost their battery output (12 volts) up to the typical 120 volt household rating. In doing this they loose at least 20 percent of their power just in the inversion process. Then, by using 120v appliances they also use much more power inefficiently, especially since many items in the house need to have the power stepped back down, just take a look around and see how many items in your house have wall warts attached. 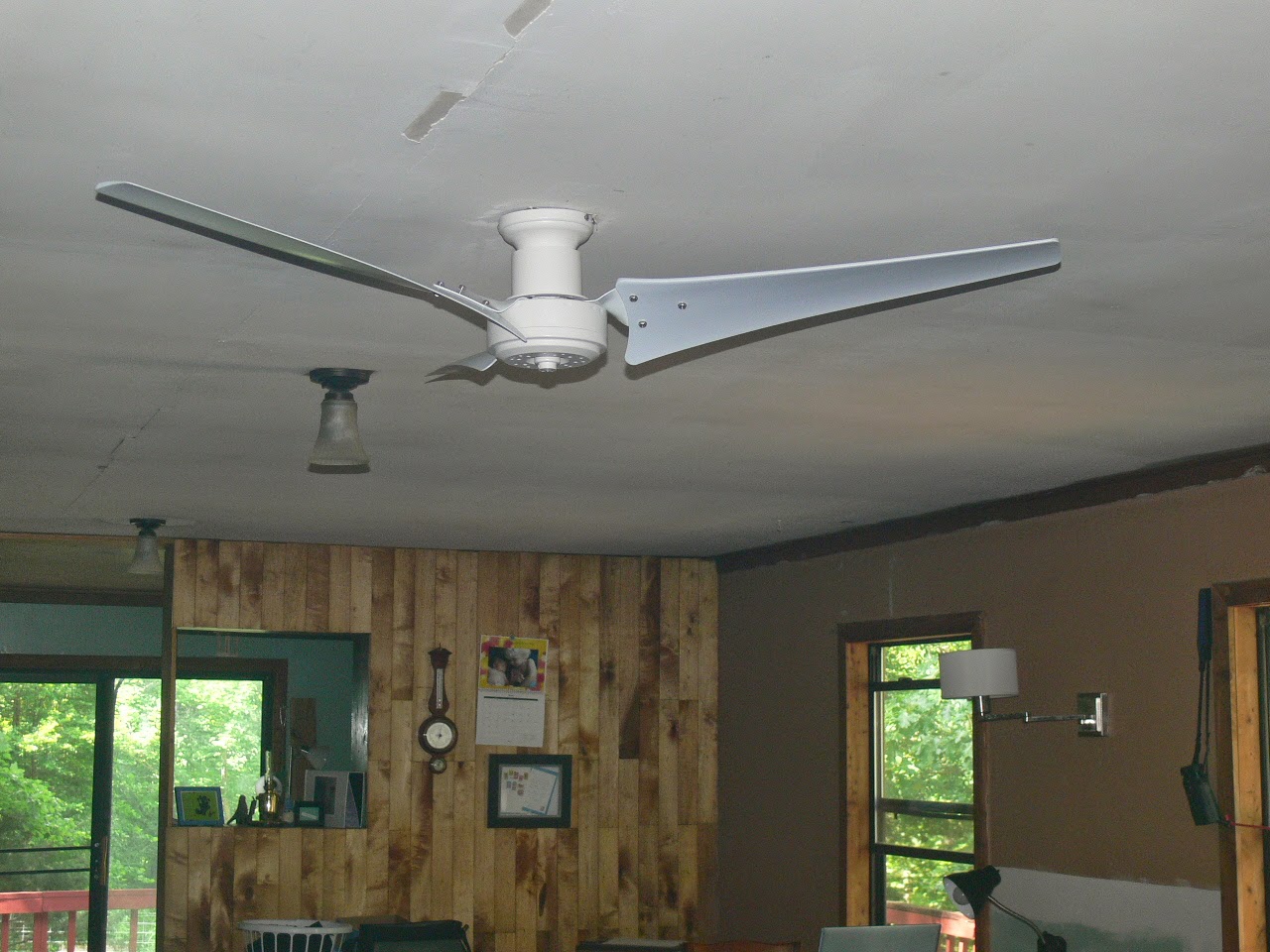 Okay, after that short digression, let's get back to our new ceiling fan. Our first summer here we picked up some table fans at Walmart that were actually stepped down to 12V in the manner I described above. We lopped of the end of the cords and replaced them with plugs we could plug directly into our wiring. These fans work great for an up-close breeze as we sit and work, but we have been wanting to get a ceiling fan to circulate the air in both the summer and winter. In the winter, the air near the ceiling is probably about 20 degrees warmer than that down where we are sitting, so it would be nice to be able to mix that in using the ceiling fan. Alan spent quite a bit of time searching and found ceiling fans that runs directly on 12V. It is extremely energy efficient and pulls only half an amp, which is very similar to what one of our light bulbs pull. The fan has summer and winter settings which change the direction of the air flow and it also has variable speeds. The speed control uses a nifty idea. Remember my discussion about how most people use an inverter to boost their power back up to 120V? Well, the speed control has a mini inverter, basically a circuit board on the back of the wall switch, that varies the power between 9V and 25V. By turning the speed control dial on the wall switch, you change the voltage which changes the speed at which the motor is rotating the fan blades.

8. We have not crossed everything off our to-do list.
When we first moved to the property, we had so many projects we had to prioritize them as to what needed to be done first. Now, we tend to add projects to the list as we discover new ideas and products that will enhance our off-grid life. When most people first learn we are living off-grid, they envision a glorified, or not so glorified, never-ending camping trip. As we describe to them all the amenities we have in our home they are usually surprised. Our original goal was not to be able to simply survive off grid, it was to set up a comfortable home in which we choose to be as self-sufficient as possible. That means providing power for all of our needs and desires, having a water supply that provides enough water to live comfortably, etc. Yes, some people may think we are roughing it in some aspects of our life, but it is always a challenge we enjoy. When we come across something we want to improve in our 'quality of living' we see that as another adventure in problem solving. It has been enlightening to look back and see how far we have come from that first night in the house with oil lanterns and just two solar panels providing power to charge our computers.

9. We have not missed the on-grid life.
In all honestly, if you asked me at the beginning of this adventure if I was going to miss any creature comforts, I probably would have come up with a list of things I thought I would miss. Maybe a washer and dryer, possibly a freezer or my KitchenAid mixer, but after over two years, I must say I am totally content. In fact, when we do have to jump back into the grid life when we makes trips to Wisconsin like this spring, we actually find ourselves homesick for our off-grid life.

We are truly blessed to have this quirky life and to have not felt the need to lead a normal life.