O Knights of Ni, we have brought you your shrubbery...

No, not that kind of shrub, but I couldn't resist using that Monty Python quote. The shrub I am going to talk about today is the one I made and canned this week. Sound intriguing?  According to Wikipedia here is the definition of a shrub:

In terms of mixed drinks, shrub is the name of two different, but related, acidulated beverages. One type of shrub is a fruit liqueur that was popular in 17th and 18th century England, typically made with rum or brandy mixed with sugar and the juice or rinds of citrus fruit.


The word 'shrub' can also refer to a cocktail or soft drink that was popular during America's colonial era, made by mixing a vinegared syrup with spirits, water, or carbonated water.The term 'shrub' can also be applied to the sweetened vinegar-based syrup, from which the cocktail is made; the syrup is also known as drinking vinegar. Drinking vinegar is often infused with fruit juice, herbs and spices for use in mixed drinks.

In my case, I wanted to create a vinegar based fruit syrup that I could can and then later add to a variety of bases such as sparkling water or ginger ale. A couple years ago we were introduced to shrubs at an artisan pizza restaurant that offered a strawberry-black pepper shrub that was quite tasty. There are lots of recipes for creating shrub concentrates, but almost all of them are for a refrigerated end product. I wanted to be able to can up a batch, or several various flavored batches as we harvest the fruits and berries in our gardens and around the property.

This year we had a lot of strawberries and rhubarb, well a lot for our young gardens. I had been harvesting these over the past months and dehydrating them on a weekly basis as I never have enough at one time to create a batch of anything. The cool weather this week, and the tomato soup project last week, has got me in the canning mood early this year so I pulled together another project. First I set about re-hydrating  the two types of strawberries from my garden, Ozark Beauties and Berries Galore, along with some of my rhubarb. I placed about 2 cups strawberry pieces and 1 cup rhubarb slices in a tall glass jar, add 4 cups of water and placed it in the fridge for about 24 hours. I checked to make sure that most of the liquid had been absorbed by the fruit but that there was still a little in the jar. This would indicate that the fruit had taken on all the water that it could.

I then pulled together everything I needed to create and can the shrub. The recipe I started with called for fresh fruit and also used different spices but I prepped my dehydrated stores and opted to use black pepper as the spice: 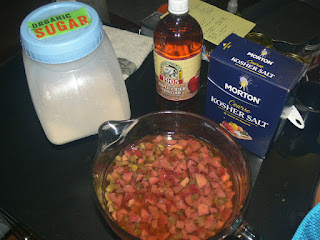 I prepped half pint jars and lids for canning and put water in the water bath canner to bring to a boil. With the above ingredient list I was thinking that 10 half-pint jars (10 cups) would be enough for the batch. I know, the fruit, sugar and vinegar add up to 11 cups but my thinking was that when the sugar dissolved it would not take up as much space. But, to be on the safe side I did prep 12 jars. In fact, I only had ten empty half-pints on my pantry shelves ready to be reused so I had to open a new box of jars to take out two more. I told myself that according to Murphy's Law if I did not open that new box to prep those two extra jars I would be in the middle of filling the batch and realize I was running short of jars. 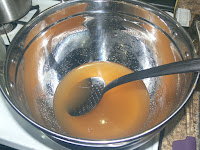 I started preparing the shrub by adding the vinegar, sugar and salt to my maslin jam pan and heated it to dissolve the sugar. I then added my fruit and heated it just below the boil. I wanted the mixture to be hot to put in the jars but did not want it to get foamy so I took it off the heat as soon as I saw foam just starting to form.

I am a little OCD about getting equal amounts of ingredients in jars when canning things like soup. I usually add the individual ingredients in layers rather than cooking a big batch and ladling in random scoops that may not evenly disperse the ingredients across all the jars. I am not digressing (for once), I am explaining why my next step involved using a slotted spoon to scoop the fruit out of the shrub mixture and evenly distribute it into each jar. I scooped up a spoonful with my slotted spoon and used my canning jar funnel to place the spoonful in each jar which filled them about half-way with fruit. This seemed like a good amount to me and when I fished out my last spoonful of fruit from the shrub liquid I had filled 10 jars. Did you get that irony? Is that Murphy's Law in reverse or Murphy's Law2? I calculated 10 jars, then assumed Murphy's Law would strike so I over-compensated with 12 jars and then I filled 10 jars with fruit. Oh, well. 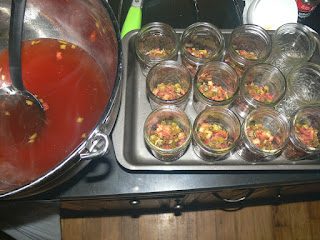 Time to ladle the liquid into the jars, leaving 1/2 inch of head space. Oops, I almost forgot to add the black peppercorns. The amount was just a guess on my part. Spices intensify when canned so I did not want to go crazy with the pepper. I settled on six peppercorns per jar and then I filled the jars with the shrub liquid. Want to guess what happened? Murphy's Law3! I filled the ten jars that had fruit in them and still had liquid to spare. I divided it up among the two remaining jars, leaving a little in the pan (you'll see why in a minute). I then took a spoon and transferred a little fruit from each of the ten jars into the two extra jars. Of course that now meant the ten jars were slightly below the 1/2 inch head space. That is what the liquid I had reserved in the pan was for, to refill the ten jars I had just robbed fruit from - sometimes overthinking a problem does work! 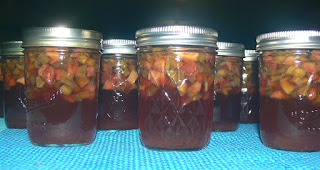 I added peppercorns to the final two jars, wiped the rims of all the jars, added lids and rings and water bathed for 10 minutes. This batch produced 12 half-pints of fruited shrub concentrate (as if you didn't already know how many jars). One jar did not seal, which very rarely happens to me when I am canning but I blame it on all the dinking around I did when filling the jars. That jar went in the fridge and became our sample jar. 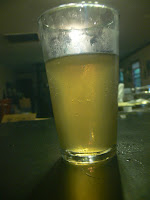 To create a beverage to sample I strained the syrup from the fruit and added 3 tablespoons syrup to a 12 ounce glass of tonic water. After Alan and I took a sip we decided it needed a bit more flavor so we added one more tablespoon. We really enjoyed this ratio and I am looking forward to experimenting with other variations. We couldn't tell the pepper was in the mix, I think a better grade of pepper and a coarse crushing would improve that. I would also like to try fresh fruit to see the difference. Elderberries are in season, so that may be the next batch of shrubs on the to-do list. And while 'prune the shrubs' may be on some people's to-do lists, prune shrubs are not on my list to try.