One More Stroll Through the Gardens

We have had an early taste of fall this year. At the end of August we had a week of weather in the low 80's and then in early September we actually put a fire in the wood burner as it got down to 66 degrees in the house one early evening - which is unheard of in early September. Not that it lasted long, we were back to typical summer weather in a few days and we were actually in our first drought of the year with no rain for several weeks.

But those few days of cool weather were enough to start the leaves on the trees turning to fall colors and the plants in the garden getting that end of season look even though they are still producing. It's that time of year where I am anxious to start cleaning up the gardens and am also making plans for work I want to do over the winter in preparation for next spring's planting season. So, let's take one more turn around the gardens to see how they are doing. Be sure to put on bug repellent because the chiggers and mosquitoes have been pretty fierce recently, so much so that I tend to keep the garden work to only that which needs to be done on a daily basis right now. My to-do list will continue to grow until we have a big enough cold snap to clear out the pests. 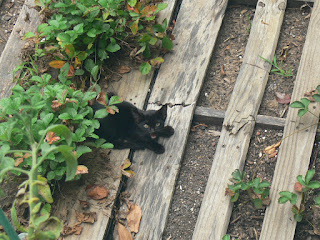 You'll notice we have a new resident at the Geek's Quad.We first spotted him down in the strawberry patch in the kitchen garden, a tiny black kitten that we think someone dropped off.  We originally called it Little Blackie, but since we often saw him sleeping under one of the strawberry plants, his name became Blackberry. It took several days of coaxing before we could catch him, and actually we are still not certain if it is a he or she. Blackberry is still tiny and must have been dropped off when just a few weeks old.

Okay, enough kitten distractions, but then this is the internet so it has to happen sometimes, right? As for the current state of the kitchen garden - things are still going fairly well. I left the various pepper plants and marigolds in the kiddie pool from when we had gone to Kentucky in July which helped with watering over the past month or so. We are still getting Yellow Italian(Sweet) Peppers and Cayenne Peppers and our rabbits are enjoying some marigolds in their greens everyday. That is everyone except Charlie, he doesn't like marigolds so he gets extra zinnias.

Our strawberries started producing again a few weeks ago, not abundantly, but I am picking several every few days and they usually go into the rabbit forage as well. During the spring and early summer I dehydrated the strawberries as I picked them because there was never enough at any given time to make anything. By the end of the season I was able to make jam and a batch of strawberry rhubarb shrub, but with as few as there are at the end of the season, I am willing to let them go as bunny treats. I am also getting a variety of herbs out of this garden which we dry to add to our supply of winter greens for the rabbits.


And then there are the gangly, almost leafless Amish Paste tomatoes that are still producing. They even have new blossoms and yesterday I picked seven more tomatoes off of them. They just do not want to give up. Last week almost all of our tomato plants still had a lot of green tomatoes on them, but they did not seem to be ripening. I decided to give everyone a watering with some of our worm juice. I had been holding off on feeding them this because of the bottom rot issues we had earlier in the season, but since there were so many full size tomatoes on the plants that needed to ripen I thought the poor, spindly plants might need a boost. Once again the worm juice seemed to do the trick, the next day we had ripening tomatoes and two days later I was picking them.

A quick jaunt down to the bottom garden and you will see the St.Pierre tomato plants are still also heavily laden with tomatoes. The one Rutgers plant, which did quite well this year, is just about done. I think there is one more tomato hiding somewhere under all the rice cow pea vines that have taken over the tomato plant. The Italian Heritage tomatoes are completely done and have been taken over by luffa vines. The Roma tomatoes died out several weeks ago and I took those plants out of their pots to plant some seeds for paw paw trees that I got from someone in our self-reliance group. My dilemma now is that I do not know what the paw paws will look like if/when the germinate so I don't know if I have weeds or young paw paws coming up in the pots.

I am still picking both types of cow peas (a.k.a. black-eyed peas) as they dry on the vines. I don't wait until they are all dry to harvest them all at once because I have learned that if we get too much rain the ones that dried first will rot. I have also found dried pods that have bean chewed through by insects, so I would rather harvest  them on an almost daily basis each time I am in the gardens. That way I can also periodically sit at night and shell them rather than having buckets full all at once waiting to be processed. I have been really pleased with how many cow peas we get from just one of our raised beds.

I have not been as pleased with my recent experiment with my winter squash. I tried planting some later in the season as I was told it would help  with the problem of squash bugs. However, I still had lots of squash bugs and even more of another kind of little black and yellow beetle that is eating the squash blossoms. So much so that I do not think I am going to have any squash germinate from this second planting. It has been an interesting year in that vegetables I usually have no problems growing did not do well and others that I said this was going to be my last year to try them because I never have had much success with them ended up flourishing. But, I have learned that is the way it is with gardening. Nothing is a 'sure thing', every year is different even if you do everything the same.

Before I digress into another lecture on gardening for self-reliance (I'll make a note to make that a topic for an upcoming winter blog), let's check out the rest of the bottom garden and then pop over to the north garden. Everything else in the bottom garden is pretty much done for this year. We got a few fall red raspberries and I harvested both beds of ground cherries. I left the last of the ground cherries to self seed the beds for next year. I still have luffa vines and zinnias down here to forage for the rabbits every day. We didn't get a lot of luffa gourds this year, but we will get plenty of seeds from them for next years crop.

The zinnias have been prolific and last week I experimented with dehydrating them to see if the rabbits would eat them dried. They happily munched the dried leaves but not the stems, even though they like when we feed them fresh stems. I am still going to dehydrate some of the stems in hopes they will not be as picky this winter, but since I know they like the dried leaves I will strip the leaves from the stems, dry the leaves and feed them the fresh stems while we have them. 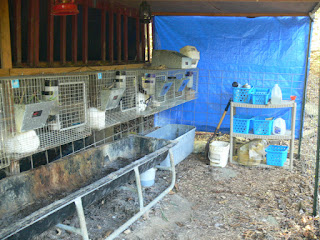 As we head to the north garden you will see the bunnies had a bit of a home make-over. I think the may have called in Joanna Gaines for some advice because their shelving unit was so cluttered. Now they have everything neatly organized in functional blue baskets they purchased at the Dollar Tree. Although I think I did hear Jessica mumbling something about Target having a better selection of quality products. Roger wanted to build boxes out of cardboard and duct tape. No really, we haven't lived out here in the wilderness too long....

On to the north garden. The Seven Dwarfs (fruit trees) seemed to have survived the invasion of the caterpillars. Once I discovered the invasion, I went out almost every day and inspected them, removing at least a half dozen different types of caterpillars. It was very interesting how many different kinds there were and that they all appeared within a few days of each other. I also liberally sprinkled diatomaceous earth (DE) on all the trees (a couple of them have grown taller than me over the summer) and that seemed to have stopped more invasions from the eggs that were on the leaves.

The herb beds are still doing well, although the lemon balm also had a caterpillar infestation for a while. I was harvesting lemon balm and noticed some of the plants had leaves that were folded in half along the center stem line. I picked on and ran my snippers along the inside of the folded leaf to see why it was stuck together and a little black caterpillar slithered out. Ick! Being scientific, I could not assume that one instance was proof that all the folded leaves were caused by caterpillars, maybe the leaves were folded for another reason and this caterpillar happened upon it and decided to move in. So, three more folded leaves and three more slithery caterpillars and I was satisfied that the theory was proven. The strange thing was, they lemon balm did not seem to be harmed. I kept an eye on it and even after the invaders disappeared the herbs were still intact.

I have planted some kale in the north garden that I hope will do well this fall. I had to sprinkle it with DE as it was being eaten and I have also noticed something has been digging in that raised bed, but hopefully it will survive. As I move from garden to garden I am making mental notes as to what I am going to be moving around this winter. For instance, these blackberries in the bed next to the kale, I planted these two years ago when I was running out of time and had to get them in the ground somewhere and this was supposed t be temporary. This winter I am planning on expanding the bottom garden, yet again, to make a new berry bed. 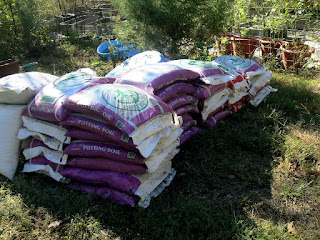 Last week we were in a town we do not visit too often and I happened to see a store that was clearing out their bags of potting soil and top soil. A couple days later we took Hoss, the big truck, and loaded up a ton (literally) of dirt and brought it home. I also bought two large rolls of landscape fabric in the past month. These are items we usually start bringing home in early spring when I get the itch to get out in the gardens. Now when I stand at the kitchen window, look out and see all those bags of dirt just waiting for me to start mixing them with rabbit pooh and dumping them into raised beds and pots, all I can think is "Spring has come early!"